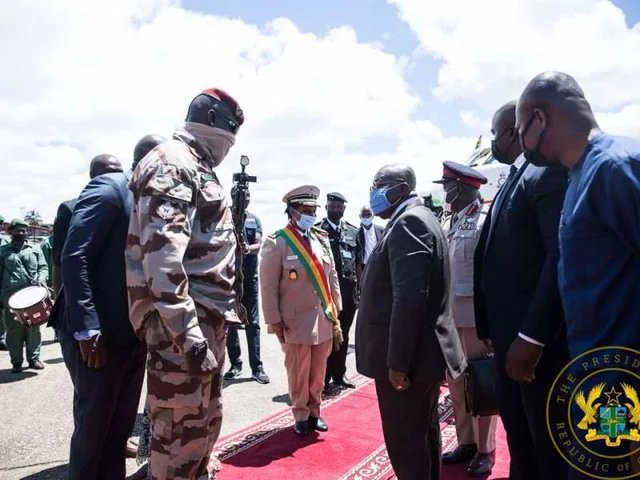 Colonel Mamady Doumbouya and his CNRD have made fresh declarations few hours after a delegation of ECOWAS heads of states left Guinea, following discussions with the junta.
According to the press release, the overthrown President, Alpha Conde, will not be allowed to leave Guinea as circulated in the media.

The CNRD further stressed that they will not under any circumstances give in to any pressure from ECOWAS or any international group.

The military junta indicated on Friday that it would not bow to regional pressure and allow President Alpha Conde, who was detained since his overthrow on Sept. 5, to leave the country.

The press release, which was read on behalf of the junta by Lt Colonel Aminata Diallo assures Guineans and everyone across the globe that President Alpha Condé “will receive humane treatment worthy of his rank in his country”.

John Paintsil Football Club Visited The Massive Tourism Attraction Center @ Ajumako Bisease Central Region Ghana Biztown Recordz Ghana.com Hello fellow Bisease-Central-Ghana, greetings to you all, my name is Kojo Beatz And Business Name Is Master Kay Beatz/Mr Kay and am here to feed you with the best and upcoming big team in the district…..here… END_OF_DOCUMENT_TOKEN_TO_BE_REPLACED