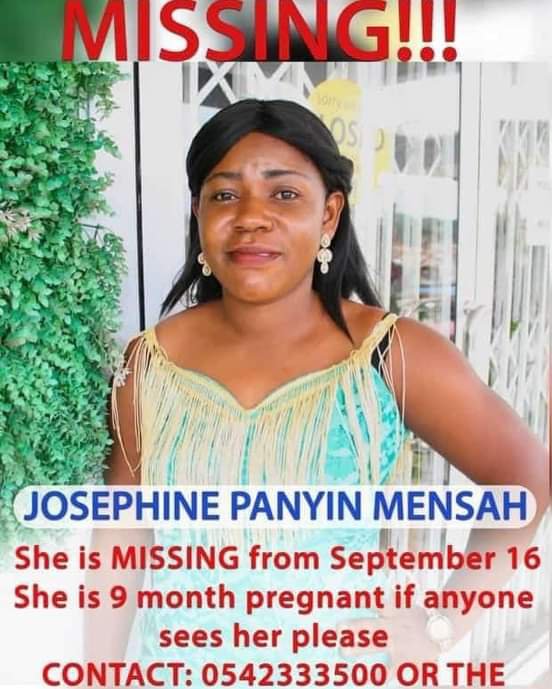 Some aggrieved residents in Takoradi have expressed dissatisfaction over reports by the Ghana Police Service that 29-year-old Josephine Panyin Mensah faked her pregnancy and kidnapping.
The neighbours of the victim clad in red chanted war songs and rained curses on the police administration and the Western Regional Security Council (REGSEC) for making such claims that the family faked her [Josephine Panyin] pregnancy.

Earlier, the Ghana Police Service announced that the missing pregnant woman is now a suspect for conspiracy to kidnapping.

According to the Police, Mrs. Mensah conspired with three others to fake her kidnapping.

In a statement copied to the media, the Police also said she was never pregnant and she planned the hoax.

“The victim, now a suspect, during interrogation mentioned the European Hospital in Takoradi as the hospital for her antenatal reviews and assessment. Medical records at the facility suggested that the lady visited the hospital without pregnancy somewhere in October last year,” the statement said.

The Western Regional Minister, Darko Mensah announced that after the woman was found that she was never pregnant.

In an interview with Accra-based Angel FM after Josephine Panyin Mensah [Kidnapped woman] was reported found on Tuesday, September 21, the Minister disputed the nine-month pregnancy of the victim.

He told the interviewer that a preliminary investigation was conducted on the supposed missing but found pregnant woman reveals she wasn’t pregnant.

In a statement by the Police, it said preliminary investigations reveal that she was never pregnant and conspired with others to be kidnapped.

The Police also said 3 people have been arrested in connection with the conspired kidnapping.