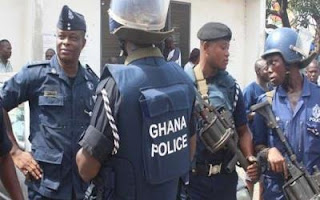 The Konongo Police Command has asked the Konongo Fire Service to produce its Rescue Crew to help investigate ‘criminal misconduct’ after the alleged looting of GH¢30,000 at an accident scene.

The Rescue Crew is alleged to have looted the said money at the accident scene of the Paramount Chief of Sekyere Kwamang Traditional area, Barima Bretwum Okyere Bediako II, which occurred on December 22, 2021.

According to the police, the Rescue Team responded to a distress call to rescue accident victims trapped in a mangled vehicle in a road crash at Triple Lane near Odumasi on the Konongo-Kumasi Highway.

At the scene, the police source said the crew allegedly conducted spot checks on the three lifeless bodies in their 4X4 vehicle and retrieved an amount of GH¢30,000 and an I-phone from the Chief of Sekyere Kwamang.

According to The Chronicle report, the Rescue Team, however, failed to disclose this to the police after they took over the mangled vehicle and commenced investigations.

The Chronicles adds that the police disclosed that “for more than two weeks after the accident, the Fire Service Command never mentioned that such items were retrieved by its personnel and were in its possession.

Furthermore, “the source said police intelligence, however, revealed the alleged ‘criminal conduct’ of the fire personnel and subsequently invited the Konongo Fire Service Command on January 5, 202 to help with the investigation.”

The Municipal Fire Service Commander in charge of Asante Akim Central, Richard Aweso, confirmed the incident in an interview with The Chronicle and said “one of the Fire Service Crew members was the prime suspect because he was found to have the late chief’s bag and I-Phone.”

When The Chronicle asked why his outfit failed to inform the police about the retrieved items at the accident scene, Richard Aweso said only the suspect could answer the question.

He, however, added that the Konongo Police had formally written to the Fire Service Command to release the said Fire Service Rescue Crew members who were on duty to assist police with further investigations.

John Paintsil Football Club Visited The Massive Tourism Attraction Center @ Ajumako Bisease Central Region Ghana Biztown Recordz Ghana.com Hello fellow Bisease-Central-Ghana, greetings to you all, my name is Kojo Beatz And Business Name Is Master Kay Beatz/Mr Kay and am here to feed you with the best and upcoming big team in the district…..here… END_OF_DOCUMENT_TOKEN_TO_BE_REPLACED